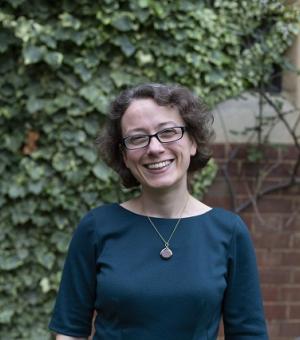 Fellow and Tutor in Theology, Director of Studies in Theology (2012–), Senior Treasurer of the Joint Common Room; Departmental Lecturer in New Testament Studies at the Faculty of Theology and Religion
MA, DPhil (Oxon)
mary.marshall@stb.ox.ac.uk

After completing my undergraduate degree in Theology as a scholar at Keble College, I took an MSt and DPhil in New Testament Studies, funded by the AHRC. My thesis was examined in May 2009. I am also a qualified secondary school teacher and taught Religious Education between 2009 and 2012. I also contribute to the adult and lay ministry education (Learning For Discipleship) programme in Salisbury Diocese. In October 2012 I took up my current positions at the Faculty of Theology and Religion and St Benet’s Hall.

I teach undergraduate tutorials in all the New Testament papers for Final and Preliminary examinations (Introduction to the New Testament, The Gospels and Jesus, and Pauline Literature) as well as the Varieties of Judaism paper. As Departmental Lecturer in New Testament Studies at the Faculty of Theology and Religion, I will be delivering several series of lectures this academic year, introducing the New Testament, on the “Historical” Jesus, and on the Gospels of John and Matthew. I share responsibility for chairing the Senior and Graduate New Testament Seminars with several of my Faculty colleagues.

My primary interests concern the Gospels and gospel tradition in its Jewish contexts. My doctoral research analysed the portrayals of the Pharisees in the four Gospels and the Acts of the Apostles. I wanted to balance efforts to reconstruct the historical group with an approach which takes the New Testament portrayals seriously as ends in themselves. I explored the nuances of each author by drawing out the distinctions between portrayals and their function in each text. I have since composed a number of shorter papers on a variety of topics relating to the Gospels and hope to expand the scope of my investigations to non-canonical “gospel” material.

‘Becoming “Another”: Nicodemus and his relationships in the Fourth Gospel’ in Schmiedel, U. and Matarazzo Jr, J.M. (eds), Dynamics of Difference: Christianity and Alterity.  A Festschrift for Werner G. Jeanrond (London: Bloomsbury, T&T Clark, 2015), 33-40.

The Portrayals of the Pharisees in the Gospels and Acts (FRLANT 254; Göttingen: Vandenhoeck & Ruprecht, 2015).

‘“Blessed is anyone who will eat bread in the kingdom of God.” A Brief Study of Luke 14.15 in its Context’ in Tuckett ed. Feasts and Festivals (Leuven: Peeters, 2009).